skip to main | skip to sidebar

I am listless and it is just too hot to paint in my little art studio. It is the warmest room in my house as it’s situated over the garage which has a metal garage door that gets beaten with direct sunshine in the afternoon. So I am taking a little break. And hoping it will cool down soon!
Posted by a simple aritst at 12:51 PM No comments:

…and one last sale from the Artful Home!

This one snuck in under the wire! A work on paper from 2006, this piece was painted as part of an experiment that explored this particular color palette along with the abstract concepts in what I refer to informally as the “Jumble” series. This was the nicest of the explorations. I had never attempted to sell it previously to the Studio Sale. So when I was looking through all of my works on paper, this one struck me as being a caliber worthy of the Artful Home, sale or no sale. So up it went! And someone bought it! In a few days it will start its journey to New York.

Another Sold from the Studio Sale!

I am very excited that someone has purchased one of my figurative pieces! I painted this one in that flurry of figurative paintings I had an urge to do a couple of months ago. I enjoy painting figures, or really, faces, but I always feel unsure about how the rest of the world will receive them. Even though I cannot say how many times in the past few months that people have commented that they love my figurative work, I still feel unsure. So, now someone has actually purchased one and this makes me very happy. And inspired to do more. Anyway, this painting will soon be on her way to Georgia.

Industria #11 is one in a series of paintings I did for my very first art exhibit in 2005 at Remmi Fine Art in Denver, Colorado. I have always liked this painting and had determined to hang it back up in my home if it didn't sell in the Sale. But it did and now it’s on its way to its new home in Oregon!

The Summer Studio Sale is going on now. It started on Thursday and will continue through July 31. The Studio Sale has its own separate landing page on Artful Home’s site and below is how the first “Paintings” page appears when you click on it from there. As you can see, Sticks & Stones #56 has sold. Someone purchased it yesterday. In a couple of days it will be on its way to its new home in Cincinnati.


Posted by a simple aritst at 7:53 AM No comments:

The magic of Reverie

Here is another example of the great positioning the Artful Home gives to Reverie!  I got an email blast today from AH, featuring “New Work”. My work was not featured in the blast, but when I clicked on the link to “discover new work”, this is the page I landed on. 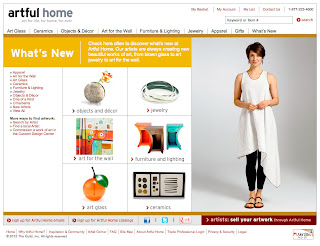 Posted by a simple aritst at 9:29 AM No comments:

This piece is entitled Thrice-Twice. That’s because underneath this painting is a whole n’other painting originally entitled Thrice that I painted in ’04. It measures 12" square. It was complete and signed, titled and dated on the back, and I even hung in my home for a time some years ago. But it was just one of those experimental pieces that never really worked, so I decided to paint over! No love lost over Thrice, but as this successor, Thrice-Twice has some things going on that I really like. At least it’s more in keeping with the abstract direction I’ve been going in lately. I have submitted this to the Artful Home’s Studio Sale which begins next week. I am very excited about the Sale! But more on that next week. Hopefully it will sell and embark on its new life free from the storage space.

Posted by a simple aritst at 1:00 PM No comments:

a simple aritst
I have been drawing since I was 2 years old (so my mother told me). My earliest memories involve drawing. I painted my first oil painting when I was 12. At one point, discouraged by a lack of direction in college, I found myself working in a situation devoid of creativity. The Universe was patient for a time and then gently guided me back to where I needed to be and I found myself making a living as a graphic designer. Now, having done this for over 20 years, the Universe is tugging yet again, and after a small amount of success with my painting, I find that this is the direction I now need to pursue. I don't think I'll ever be able to completely give up graphic design. At this point I am calling it a career shift. An alternate road not too terribly far from the main highway. Lets see where it goes.